Asia Pacific markets will look to capitalize on the strong finish seen on Wall Street overnight when stocks rose into the closing bell, taking back losses from earlier in the day. Technology stocks outperformed for the second consecutive session as traders shifted back into high-beta equities. Democrats on Capitol Hill are reportedly accepting a GOP offer that will raise the US debt ceiling through December. That removes a lingering headwind for market participants.

Although equities performed well, the safe-haven US Dollar rose overnight despite the rosy finish in New York. A robust employment report from ADP showed the US economy added 568k private-sector jobs in September versus an expected 430k, according to a Bloomberg survey. That appeared to fuel speculative rate bets, which caused the short-end of the Treasury curve to rise. The 2- and 5-year Treasury yields rose, while the 10- and 30-year’s fell. The Greenback is more sensitive to the short side of the yield curve.

Today’s economic docket doesn’t offer much in the way of event risks, which will leave prevailing risk trends in focus. Bank of Japan Governor Haruhiko Kuroda will speak at 0100 GMT. The Philippines will see industrial production data for August cross the wires. Later today, China will publish its foreign exchange reserves for last month, with analysts expecting $3.225 trillion, according to a Bloomberg survey. The data print typically doesn’t elicit a market response, however, a big miss may bode poorly for the Australian Dollar given the economic link between the two countries.

That would be down from $3.232 trillion in August. US Dollar strength and credit market volatility amid the Evergrande crisis likely contributed to the weaker expectations. Global market participants will increasingly turn their focus on the US non-farm payrolls report due out Friday. The labor report is likely to have broad implications for monetary policy. Economists see 500k jobs added in the US for September.

AUD/USD is back on the move higher after an overnight drop. The 26-day Exponential Moving Average offers the most immediate resistance, with potential resistance from the late September swing high shortly above. A pivot lower from the 26-day EMA may see prices head back toward the September low at 0.7166. 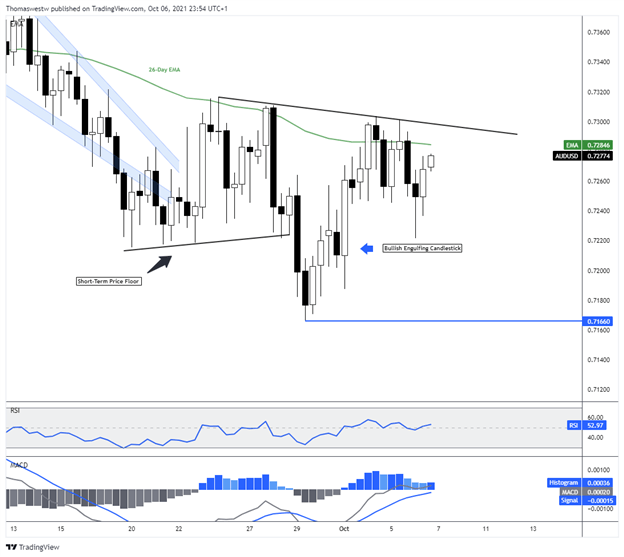