Chinese economicdata showed annualized July retail sales at 8.5% against 11.5% expected and annualized July industrial production at 6.4% compared to 7.8% expected. The house price index and fixed asset investment numbers also disappointed to the downside. The Australian Dollar was already in the markets’ crosshairs before the data and continued lower as risk assets across the board softened to varying degrees. Not surprisingly, AUD/JPY and NZD/JPY saw large moves lower, as did crude oil and Japan’s Nikkei 225 stock index.

The soft tone for equities followed on from a disappointing University of Michigan Consumer Sentiment print on Friday and comments from the Minneapolis Fed President Kashkari expressing concerns about the employment recovery. In addition, China announced the closure of another port due to coronavirus to add to concerns around supply chain bottlenecks and the impact this could have on inflation toward the end of the year.

There are significant data releases coming up this week with UK unemployment, European GDP and US retail sales due out Tuesday. Then Canadian CPI, UK CPI, Australian unemployment and Canadian retail sales. In addition, there is plenty of central bank action with RBA meeting minutes tomorrow, then the RBNZ rate decision and statement, as well as FOMC meeting minutes and the PBoC rate decision to take us into the weekend. On top of all this, Canadian Prime Minister Justin Trudeau announced a snap election for September 20th, as his Liberal Party will be seeking to form a government in their own right.

Looking at the AUD/JPY chart we can see a clear down trend and after today’s moves, we are approaching the support level from the recent previous low at 79.20.A breach below that level may signal more significant moves lower. 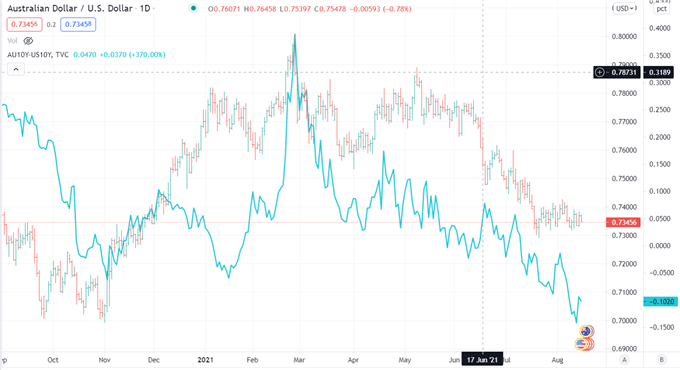