AUD/JPY tried to go higher today on positive risk sentiment. Democrat Chuck Schumer said that progress had been made on resolving the standoff about raising the US debt ceiling and Russian President Vladimir Putin made an offer to supply Europe with record levels of oil and gas. There wasn’t any disastrous news about Evergrande and that enabled Asian equities to post a positive day.

The US debt ceiling problem appears to have found a temporary solution, with reports that the Democrats are willing to accept a Republican compromise that will see the reckoning delayed until December.

The Russian offer of supplying Europe with record amounts of oil and gas was initially made by Putin. Later in the day, Russian Deputy Prime Minister Alexander Novak said that one way to achieve this would be use the Nord Stream 2 gas pipeline that travels under the Baltic Sea. It has been built but is being held up in gaining the necessary permits from the EU.

The potential for a significant increase in oil and gas production saw energy markets pull back from astronomical highs. Brent crude oil was trading lower, near US$ 77 a barrel.

The biggest movers on the positive news were equity bourses, with a positive day for the Japanese Nikkei 225 equity index amid a week of red. Hong Kong’s Hang Seng Tech index rallied 4.5% at one stage.

Yields were left largely unmoved and the US Dollar was mostly unchanged, except losses against somewhat buoyant commodity currencies. AUD/JPY and NZD/JPY are often seen as barometers of risk and both of these crosses were subdued today. This may suggest that risk appetite may not be as broad-based as the bulls would like.

Looking ahead, there is US initial jobless claims later today, but tomorrow’s US non-farm payrolls will be a focus for the end of the week.

The price is above the 10-day, 21-day, 55-day and 260-day simple moving averages (SMAs), which might normally be bullish. However, the 55-day SMA is above the 21-day SMA and the gradient of both lines is yet to turn positive. These factors may put bullish momentum in question. 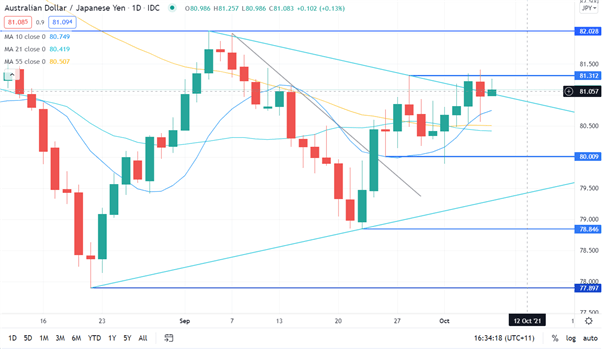