3 reasons I’ll never use my iPad as my main work device again, and one reason I would 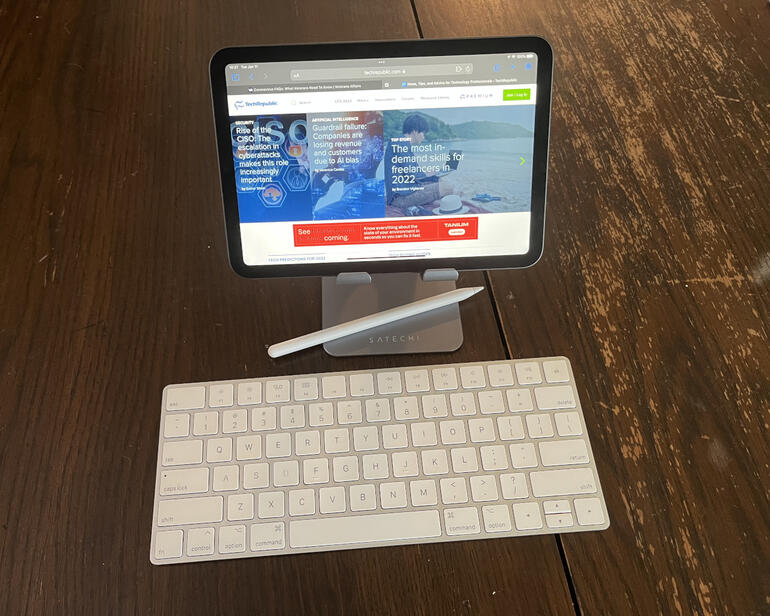 I tried it for the sake of packing light, but for the kind of work I do, an iPad is just not quite sufficient to meet my needs. The thing is, my needs aren’t that great.

If you’re getting ready to travel and are bringing your iPad and a keyboard instead of your laptop, don’t do it.

That’s not to say that using an iPad for work isn’t a great idea for some types of professionals. What I am saying is that there are a lot more caveats, surprises and little frustrations that will present themselves to you that you never anticipated.

So, let’s try that again: If you’re getting ready to travel and bring your iPad and a keyboard instead of your laptop, test your setup thoroughly well before you leave. I did not do that; hence the reason for this article.

I own an iPad Mini 6 with an Apple Pencil, and I absolutely love it. That pair of devices has done a great job at assisting me with work, as both a notepad and secondary monitor, so I assumed that I’d have an easy time using it in place of my laptop when I was traveling for the holidays.

Of course, my experiences are going to be colored by the fact that my iPad’s screen is 8.3 inches instead of 12.9 inches, but screen size isn’t one of my gripes with using the iPad for work. In fact, the one feature I absolutely loved about using an iPad for work was its multitasking feature, which worked wonderfully in spite of the small screen size and my ever-increasing need for reading glasses.

Like the Mac, iPadOS has an easy-to-use multitasking feature that allows two apps to be displayed side-by-side. In the case of the iPad, multitasking is enabled by tapping on the three dots in the center top of the screen, as opposed to using the green button at the upper left of an app window, as is the case with macOS.

I write for a living, and quite a lot of my writing involves looking at sources. Having the ability to put my work on one side of the screen and my references on the other has been invaluable; quite frankly I wouldn’t even try working on my iPad were such a feature not available.

Multitasking on the iPad works fabulously, and it even maintains the multitasking screen as a separate item in the app switcher screen, so you can minimize it and look at something else without losing your existing workspace.

As I mentioned above, the issues I had with my iPad may have been resolved if I had done better testing of my setup before I left. Had I done so, I probably would have come to the same conclusion: That it won’t work for me.

The first trouble I ran into had to do with some differences in how iOS web browsers handled backend elements of the TechRepublic website. In particular, they didn’t. In Chrome, the moment I loaded a page in our CMS the screen the web content displayed in Chrome would become unresponsive. Switching to Safari fixed that problem, but then the Publish Article button disappeared.

Other minor formatting and display issues that interrupted my workflow appeared, leading me to the conclusion that, were I to want to use my iPad for work on a more regular basis I would first have to walk through everything I may need to do on it to see what works and what doesn’t. My day-to-day computing needs are not extreme, and I’d hate to see the testing people with more intense needs would have to go through before they could safely leave their laptops behind and save a few packing pounds.

Secondly, there’s the touchscreen: It’s great to use for most things, but when you’re editing a 500+ word document it can get a bit frustrating. I have an Apple Pencil, which did help, but at the end of the day I still had to stop what I was doing, grab my Pencil and (hopefully) tap the right spot before carrying on.

Desktop computing and touchscreens have a tricky relationship, as anyone who’s used a touchscreen computer can attest. Put simply, the precision of desktop computing doesn’t map onto touchscreens and mobile devices very cleanly, meaning you have to sacrifice one or the other to get a practically useful device.

The only truly good alternative to touch controls on an iPad is to bring along a trackpad or mouse, both of which can be connected to an iPad via Bluetooth or a daisy chain of 2.4GHz dongles. So much for simplifying your packing load.

The last major pain point I experienced working on my iPad was my setup, and the surprising lack of flexibility working on an iPad afforded me. Unlike my MacBook Pro, my iPad with its stand and Apple Magic Keyboard doesn’t do a very good job of sitting on my lap while I work.

If I had a hardshell case with a keyboard built in I’d have had a bit more freedom to choose my work spot, but still within limits. I had one for my iPad Mini 4, and I did try using that for work several years ago. Unfortunately, it was still too light and small to sit reliably on my lap without bouncing and sliding around as I typed.

What you should consider before using an iPad for work

Your mileage is going to vary a lot when it comes to working on an iPad. Visual artists and designers may find them a perfect fit, but those who need to multitask, or are hoping their iPad can truly duplicate the desktop experience, will probably find it wanting.

SEE: iCloud vs. OneDrive: Which is best for Mac, iPad and iPhone users? (free PDF) (TechRepublic)

If you’re planning to travel and want to use your iPad as your sole work device while on the road, be sure to think of the following before leaving your laptop at home:

It’s unfortunate that the iPad wasn’t able to suit my computing needs as an all-day device. It’s still great for taking notes and doing quick work tasks, but as a writer I simply can’t make it do everything I need. Have you used an iPad for work and have a different take? Let your fellow readers know in the comments below.